Learn about kuhli loach the worm like loach. Kuhli loaches (Pangio kuhlii, earlier named as Acanthophthalmus kuhlii) also named as coolie loach, Leopard Loach is a peaceful ground fish which is more active in the evening and at night.

The kuhli loach was originally described as Cobitis kuhlii by Achille Valenciennes in 1846 to commemorate Heinrich Kuhl’s work as a naturalist and zoologist. Kuhli fish is an “owl” therefore its activity can be observed during twilights and at night, it is always hiding.

The fish can hardly be seen at day time, especially when it’s kept in a tank alone, however it’s not impossible, if one watches the fish for some time.

As with most fish, the first thing that you need to concentrate on is conditioning the fish. The water should be as pristine as possible, and the fish should be provided with a high quality diet for a full week. This should include live food if possible, but frozen food is nearly as good.

Loaches are more susceptible to disease than other aquarium fishes. This may have to do with the faint body scales and no head scales. So take caution when introducing these fish to an established tank. They are also very sensitive to different medications used to treat many diseases; a separate hospital tank is needed. Cold water and condition changes can also cause stress to this fish which makes them even more prone to disease. 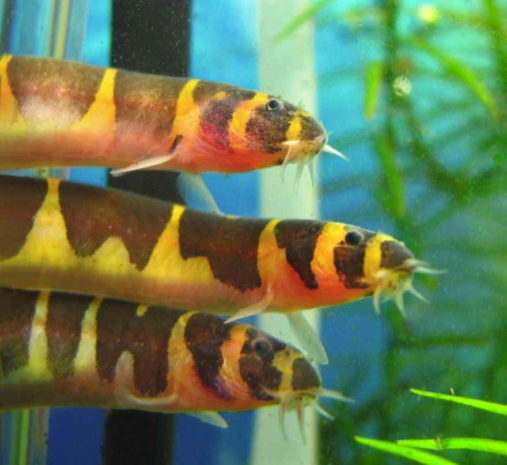 What is Kuhli loach?

The Kuhli Loach is a smaller, worm-like loach. Their life span is generally about 10 years, though they have been reported to live even longer. This loach’s body has a pinkish yellow background color crossed by 12 to 17 vertical dark bars and has three bars on its head. There are no scales on the head, the eyes are covered by a transparent skin with a short spine in front of them, and they have 3 pairs of whisker-like barbels. The dorsal fin is set very far back, and the anal fin is set at the end of the base of the dorsal fin. There is also an albino color form of this Loach, known as the Albino Kuhli Loach. This a bred color form, and it is not certain whether the Albino Kuhli Loach occurs naturally in the wild. But these would be highly visible animals, so beacons for predation.

These fish can get up to about 4.7 inches (11.99 cm) though they are usually smaller in the aquarium. The kuhli loach has an advantage over most of the other loaches kept in aquariums, inasmuch as it never grows too large, growing around 8-11 cm (3-5 in) in length.

The minimum tank size required for the kuhli is 20 gallons (37 liters). Kuhli loach tank should be moderately sized with soft (0 – 5 dGH), a little acidic water (ph: 5.5-6.5) and moderately lighted. Is a ground fish, so not the tank size is determining, but the square of its bottom. Tank should be thickly planted, because the fish likes spending day time in the plants. The substrate should be small grained without sharp edges, sand is an ideal substrate. The fish can dig into the substrate to dig out blood worms out of it.

Kuhli loaches don’t reach sexual maturity until they are at least 12 to 18 months old. Some sources even say they have to be over 2 years old before they are ready to breed for the first time. They spawn as pairs, but it’s best to get a group of adults, and let them pair off and select their own mate. It should really come as no surprise, that not much is known about breeding a nocturnal fish with a penchant for hiding. In fact, successful breeding are by most accounts exceedingly rare. But with that being said, there are some basics things you can do that triggers breeding in wide variety of fish species. Once that has been completed, the only thing to do is take a wait and see approach. No one seems to know the exact trigger that initiates kuhli loaches spawning. Some people speculate that they need a gravel substrate, while others believe that temperature is the key. You can play around with these variables and hopefully something will trigger a successful spawning.

Kuhli loaches are omnivorous, the Kuhli Loach will generally eat all kinds of small live and frozen foods and meat based foods are relished the most. They also like sinking pelleted and tablet foods, flakes, and a bit of vegetable foods such as algae wafers. To keep a good balance give them a high quality prepared food every day. Feed tubifex worms, brine shrimp (either live or frozen), mosquito larvae, and daphnia as a treat.

Kuhli loach tank mates could just don’t big enough to eat them. They prefer to be kept in schools of 3 or more. Many fish can be kept as tank mates with the Kuhli Loach as long as precaution is taken not to include fish that are able to take them for a bite of food. The fish is completely peaceful, compatible with any fishes of alike size, white cloud mountain minnow, harlequin rasbora, otocinclus catfish, red-tailed black shark, betta and shrimps like red cherry shrimp. They pick up the leftovers that other fishes haven’t eaten from the tank bottom.

A smooth sandy substrate is a must for these. Keep this in a group of 6 or more. Have plenty of hiding places for them. This will ensure that they become less shy. They prefer slightly acidy, soft water. However, this is not crucial as long as the water conditions are quite clean. They prefer no nitrites or ammonia and low nitrates from water changes. They are a great community fish that are colorful and active while not aggressive at all.