Learn all about jack dempsey fish care, tank size, food, life span and feeding methods. The names of this cichlid, both scientific and common, all have a story. When first introduced to the aquarium hobby this fish was considered quite ferocious, though today it is known there are quite a few other cichlids which are far more aggressive than the Jack Dempsey. However, because of this perceived hyper aggression its common name became “Jack Dempsey” after the 1919 Heavyweight Boxing Champion of the World.

Its genus name Rocio was named after the wife of the describing author, Regan, and its Spanish interpretation means “morning dew,” an allusion to the sparkling scales on the cheeks and sides.

Specific name of the fish “octofasciata” comes from Latin words “octo” (eight) and “fascia” (a belt or a stripe) and it is translated as “eight-striped”.

The easiest and most common way to provide Jack Dempseys the diet they need is to feed them with dried pellets or flakes that float at the top the fish tank. Dempseys are top feeders and prefer to eat food while it’s floating as opposed to picking it from the ground. Pellets work better than flakes because they don’t have the tendency to scatter so much.

Jack Dempseys are prone to skin flukes and other parasitic infestations (protozoa, worms, etc.), fungal infections, and bacterial infections. It is recommended to read up on the common tank diseases. Knowing the signs and catching and treating them early make a huge difference. 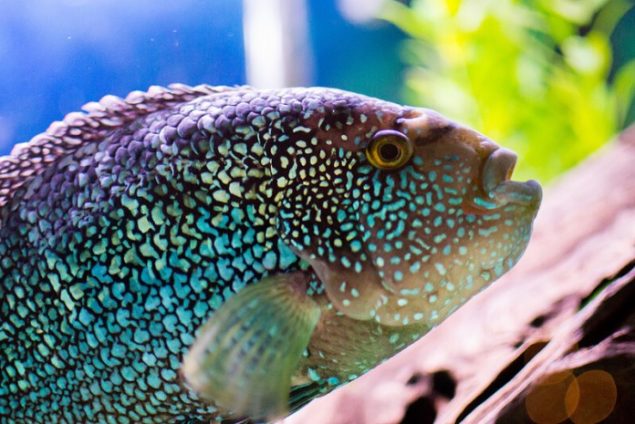 What is Jack dempsey Fish?

The Jack Dempsey Rocio octofasciata (previously Cichlasoma octofasciatum) is a large and magnificently colored South American Cichlid. It is stocky and compact in shape but can grow to almost 10 inches (25 cm) in length. The coloration changes as the fish matures from a light gray or tan with faint turquoise flecks to a dark purple-gray with very bright, iridescent blue, green, and gold flecks. Their colors change under stress. The dorsal and anal fins of mature males have long, pointed tips. Females lack these exaggerated tips. During breeding both genders considerably darken in color, appearing almost black with little to no metallic coloration.

It’s quite simple to take care of Rocio octofasciata, since it’s not demanding, so it can be kept by the beginners. However, you have to keep in mind that this is an aggressive fish that gets on well with other cichlid species while it’s young, but as the fish grows it becomes more and more aggressive, so then it’s desirable to keep it without any other tank mates or only with large fishes. Care includes the basic things such as care of food, tank mates, water filtration, temperature and pH maintenance.

Jack dempseys are very good eaters and like to eat flakes, pellets, freeze dried bloodworms, brine shrimp and love live foods. They are omnivorous; the Jack Dempsey will generally eat all kinds of live, fresh, and flake or pelleted foods. They get quite large so they should be fed a high quality pelleted food and large chunk foods such as meat or fish. Be careful to not overfeed warm blooded meat (such as beef and poultry) as the types of amounts of proteins and fats in these foods can be harmful to fish if they are overfeed. Feed such foods, such as the commonly fed beef heart, sparingly and only as an occasional treat.

It’s possible to raise these cichlids for over 15 years if kept properly, although average lifespan of Jack dempseys is between 8 to 10 years.

Feeding jack dempseys isn’t that complicated. Like other cichlids, feed your Jack Dempseys two to three times a day, but only as much as they’ll devour in a minute or two. Watch your fish carefully as the more aggressive ones will eat quicker and may leave little to nothing for less aggressive fish. Keep an eye on any tank mates you have in their aquarium as well, as many Dempseys will readily attack and eat anything they can get their mouths on.