Learn all about cichlids types, care, breeding and the tank requirements. Cichlids are one of the largest families of fishes with more than 2000 types of cichlids, and new species are being discovered every year

The cichlid is native to the Victoria, Malawi, and Edward Lakes of eastern Africa and the Tanganyika Lake which is the largest lake in central Africa. The two different types of cichlids are thought to have evolved from different fish. The great diversity of the cichlids in these lakes is of significant importance to scientists studying evolution within species.

They can be quite fascinating and territorial, especially when they pair off and start to spawn. Some will tolerate tank mates and some can only be kept as lone individuals or in very aggressive species only tanks. Some retailers and breeders tend to keep them overcrowded in display tanks to try and limit the aggression and indeed it does seem to work.

Though the exact number of cichlid species in existence is unknown, it is estimated that about 1,600 different species exist in Africa alone. African cichlids are commonly found in natural rift lakes like Lake Malawi and Lake Tanganyika and they are also common in Lake Victoria. Cichlids from Lake Malawi and Lake Tanganyika are some of the most popular species in the aquarium trade they are prized for their brilliant coloration and for being hardy in the home aquarium. 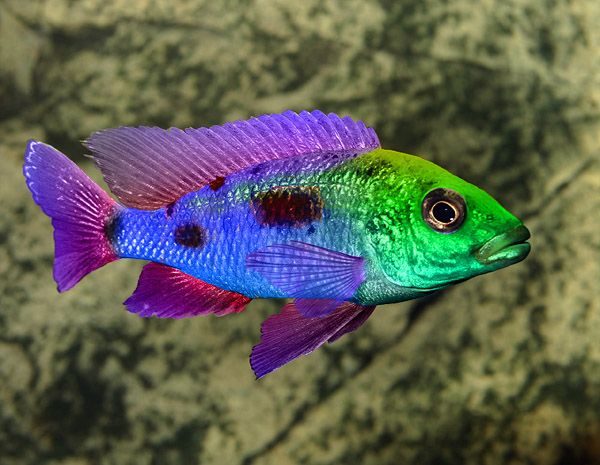 Cichlids are attractive, active, are generally quite durable fish. The cichlid is a brightly coloured freshwater fish that can range in size from just a couple of centimetres to over a metre in length. All species of cichlid are very similar in appearance with the exception of their size and colour. The Cichlid family offers the widest variety of body shapes, a vast range of sizes, and some very beautiful coloration and patterning. These characteristics are further complimented by their remarkable behavior, highly complex yet ritualistic. They are very active, intriguing, and many cichlids can be very personable, readily greeting their keepers and begging for food. All these traits make cichlids a favorite aquarium fish.

Cichlids are mainly of two types. They also have subtypes which are listed below;.

South American is home to some of the most easily identified species of cichlid including Oscars and angelfish. More than half of the cichlid species native to South America comes from the Amazon River basin where the water is warm all year round. A variety of species can also be found in Central America, North America and even a few in Asia. Some of the most common cichlid species in Central America are Jack Dempsey cichlids, convict cichlids, fire mouth cichlids and rainbow cichlids. The Texas cichlid is the only species native to the United States. Though cichlids are not widely distributed throughout the eastern part of the world, there are a few species to be found in Asia. All of the Asian cichlid species belong to the genus Etroplus.

Cichlids are one of the other very popular types of aquarium fish. Because of their distinct colours and aggressive nature they appeal to a wide range of aquarists. Due to rocks such as limestone bordering the lake, it has caused there to be a very high pH and hardness within the water system. Due to a different type of water they are usually unable to be put with other community fish unless they share the same water parameters. There are two major types of cichlids, African and American; it is uncommon to house both species as they appear to be more aggressive toward each other, it is better to choose one of the two. Cichlids can be easy to take care of, but they are different from other types of freshwater fish in terms of behavior and water requirements.

Mouth-brooding African cichlid mating occurs something like this: the male digs out a cave (nest) for the female and lures her in by doing this silly fin shaking dance (there’s also a disturbing “kissing” version). She lays her eggs in the nest and he fertilizes them. Then she picks up the eggs in her mouth and carries them until they hatch. The eggs will hatch between 10-15 days after fertilization. The female then hold the babies in her mouth for up to two more weeks, occasionally letting them out to feed them. Most new mothers will start releasing the babies about 2 weeks after you notice they are carrying them, but will suck them back in when danger threatens. New mothers also have very small batches of eggs: around 10 or so. A mature female will have up to 30 eggs.