Ghost shrimp are transparent, easy to care for shrimp frequently sold as live food. Several species are sold under the name Ghost (pictured is P. paludosus, very common in the US), and thus it is a good idea to get an id on them. Sometimes Macrobrachium shrimp are sold as Ghosts.

A ghost shrimp’s natural habitat is in the brackish-water of wetlands, but they are a creative addition to any home aquarium. They are unique spectacles alone in a tank or add them to more populated aquariums for character. Taking care of them is simple and rewarding. For hobbyists, they can provide an interesting addition to a tank stocked with smaller, less aggressive fish species. Larger fish may find them irresistible and will just love eating them.

As the ghost shrimp has clear bodies, food can be seen while passing through the digestive system. Ghost shrimp should be fed twice a day and should be given the amount of food eaten in about 1-3 minutes.

They’re ok with many mid to small size fish, but won’t do well with aggressive fish, or large fish, which will intimidate the shrimp. Stress is just as bad for shrimp as it is for fish. Provide plants if at all possible and plenty of hiding places. Mosses are very popular, shrimp like feeding on all the stuff that clings to mosses. 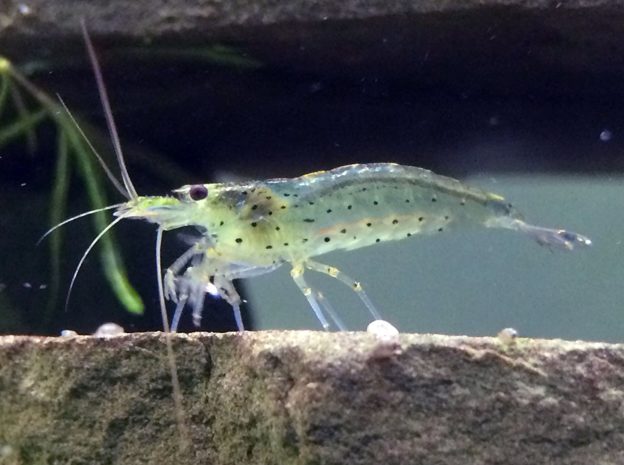 What is Ghost Shrimp?

A generic name given to different species of shrimp that are similar in size and shape almost always have a clear coloration. The species that are sold as ghost shrimp can range from Macrobrachium species (also known as long arm shrimp) to naturally colored Neocaridina species. The most commonly sold “Ghost Shrimp” in North America is the American Glass Shrimp Palaemonetes paludosus. The Ghost Shrimp is a cool little freshwater shrimp that you may be interested in keeping if you have the right tank setup. Ghost Shrimp are sometimes called the Glass Shrimp because they have a semi-translucent body. This is a very inexpensive shrimp to purchase and should live for a year or two and sometimes even longer. They are frequently used by fishermen as fish bait and they are considered pests by clam farmers who spend lots of money trying to eradicate them from their clam farms.

Ghost Shrimp care is relatively easy. They are very active and busy invertebrates tirelessly scouring the tank for food to eat. Always on the go, these shrimp are in their element when kept in an established tank that is not “too clean”. As scavengers, they search the gravel or substrate for little bits of edible material that is otherwise uneaten. To that extent, Ghost Shrimp are decent aquarium cleaners, almost in the same league as Amano Shrimp and Nerite Snails. Ghost Shrimp are small so they may not eat as much as larger invertebrates, but they are constantly picking away at nearly everything they are near.

The Ghost Shrimp are omnivores and will consume algae, detritus and left over food. If insufficient food is present, supplement with a quality flake food or pellet. Also, boiled soft vegetables can be an inexpensive solution, while providing the shrimp with many nutrients. Of course, processed foods can also be fed to the ghost shrimp such as pellets designed for small fish or shrimp, fish flakes, or wafers. Mostly anything that can easily be broken into small bits will be acceptable.

Ghost shrimp breeding only need reasonable tank conditions and both sexes. They’re pretty programmed to breed. They begin breeding when relatively young, before they’re full grown; very common to find berried (egg laden) females when you buy them. Mature shrimp are a darker orange colour, especially over the back, with dark streaks & marks on the shells. Some populations will show some tinting of colours, green or blue, etc. You may see bright orange ‘wrist bands’ on their front legs & an orange ‘dash mark’ on each tail segment, but not all of them have these markings. Females will show a yellow saddle behind the head, like other shrimp, when sexually mature. Males are quite slender and smaller at maturity. Females are a bit larger, with a much fuller, rounder underline. Eggs take about a month to hatch from fertilization.

Good tank mates for Glass Shrimp can include others of their kind, as well as: Bamboo Shrimp (aka Wood Shrimp), Vampire Shrimp (aka Viper Shrimp), Amano Shrimp, provided the Amanos are larger, Red Cherry Shrimp, Nerite Snails, Mystery Snails, Malaysian Trumpet Snails, Gold Inca Snails, Ivory Snails, and Ramshorn Snails. Ghost Shrimp can also be tank mates with some calm and peaceful community tank fish especially Cory Catfish and Otocinclus Catfish. As always, check with the clerk at the pet store about potential compatibility issues before purchasing Ghost Shrimp and adding them to a tank. Use caution when selecting tank mates for your Ghost Shrimp if you want to keep them. Larger fish may find them irresistible and eat them. Smaller, peaceful fish species may be able to co-exist with them. Ghost Shrimp tank mates can be small non-aggressive community tank fish that are not large enough to eat them. Ghost Shrimp are not going to last long (meaning a matter of seconds) with Goldfish, Oscars and other cichlids, Frogs, Turtles, crayfish or other aggressive roughens.

Ghost Shrimps go through a molting stage in their lifespan. This is the process where their outer shell drops off as they eat and grow. During this period the shrimp is very vulnerable, so it is very important that they have somewhere to burrow during this time, preferably live plants or somewhere with lots of little hiding places.